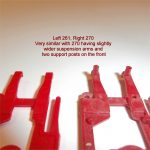 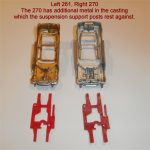 A new addition to our reproductions is a Corgi Toys 235 Oldsmobile Super 88 Sedan Box.

This model casting was used for both a standard sedan and the Corgi Toys 237 “Sheriff” version with roof light.

Of course the Oldsmobile was also used as the basis for the Corgi Toys 497 Man from UNCLE “Thrushbuster” vehicle.

Our reproduction boxes are available for all of these models.